Serving residents and communities from Middle Point to Earls Cove/Egmont

How we did it after years of effort by PHARA and with the support of Transport Canada’s Abandoned Boat Program, we were able to remove two of the harbour’s most notorious derelicts, the Lulu Island and Kwatna—but it was a long and complicated process. Both of these former wooden tugs had been anchored in Gerrans Bay for a number of years before finally breaking loose. The Kwatna beached on the rocky shores of Dusenbury Island and the Lulu Island sank in about 30 feet of water. However, it wasn’t until the Federal Government established the Abandoned Boats Program (ABP) that we could begin the lengthy legal removal process.

For those not familiar with the program, the ABP “provides grant and contribution funding to assist in the removal of abandoned and/or wrecked small boats posing a hazard in Canadian waters”. The program also provides funding for education and research (i.e. boat recycling) projects. A total of 5.6 million over five years was allocated to the program. Eligible recipients can receive up to 100 percent of the cost of assessing the cost of removal of derelicts and 75 percent of the eligible costs for their removal and disposal. As with any grant application, the process involves a significant amount of paperwork.

Our first step, thanks to PHARA members Penny Harrison and Eliza Kinley, was to apply for funding for assessing the cost of removal of the two vessels. This included obtaining consent from the vessel owners. The ABP approved us for the maximum of $5,000 per vessel and we invited several companies to bid on the assessment. A local Sunshine Coast company, MacKenzie Sea Services, was awarded the contact and they examined the two vessels using divers where necessary. With the assessment in hand, we put out a request for bids for removal and disposal of the two vessels.

The successful bidder, Gibsons-based Freedom Diving Systems Ltd, was awarded the contract. They also helped prepare the application paperwork with Transport Canada. Upon approval, the stage was set for the actual removal. Freedom Diving went ahead and coordinated the various steps required for the salvage which would incorporate surface supplied diving. They teamed up with Sunshine-Coast-based Hiballer Marine for the use of a tug and barge, excavators from Indian Isle Construction based out of Pender Harbour, disposal bins from Coast Bin Rentals as well as organizing all the necessary spill prevention equipment.

While the Federal Government was prepared to fund 75 percent of the salvage and disposal costs, our association was tasked with coming up with the remaining 25 percent—approximately$30,000. Fortunately, in-kind contributions are allowed, and the bulk of the balance was made up of PHARA’s time, services, labour and boat use. The balance was provided by a generous donation from a local family, a Grant-in-Aid from the Sunshine Coast Regional District and the remainder from our association’s operating funds. In addition, Freedom Diving Systems and Hiballer Marine donated approximately $10,000 to the project.

The initial plan was to recover the two vessels relatively intact. However, both broke up into hundreds of pieces which at least allowed them to fit into disposal bins. The Kwatna was pulled apart with an excavator. During that operation, Freedom Diving recovered 16 massive D8 batteries and 460 litres of diesel and oil Underwater, the Lulu Island broke up into slime-covered pieces that were placed by hand by divers into the large metal bins on the ocean floor. The bins were then hauled off the barge where they were dumped and sorted into metals, wood and mixed-contaminated waste. Among the other debris was a large amount of fibreglass (the wooden hull of the Kwatna had been fibreglassed), old fuel tanks, rubber and plastic.

Most was disposed of in the Sechelt landfill, but some had to be disposed of off the Sunshine Coast. The project was slated to take place over three days, but the complexity of the work and state of the vessels required the barge to be on site for five days. In addition, disposal costs were twice as much as initially expected.

In the end though, Freedom Diving Systems did an excellent job in removing the vessels. There are several more derelicts in Pender Harbour—at least one of which has caused damage to other vessels when dragging anchor in adverse weather—and it is hoped that, while the current round of funding had ended, when the program opens up again, we can work with Transport Canada to find a way to remove those from the harbour.

If you’d like to donate to the cause, please email us at board@phara.ca and we will contact you. 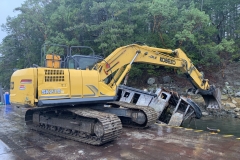 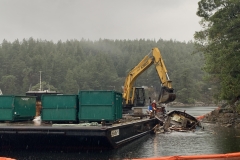 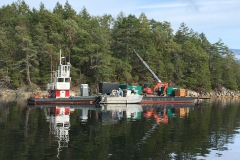 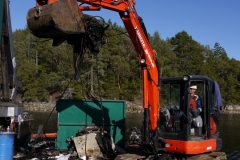 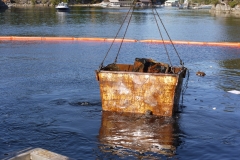 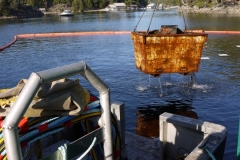 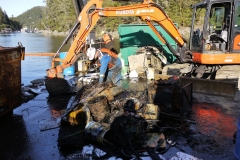 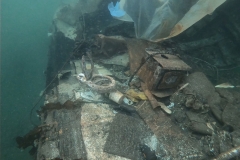 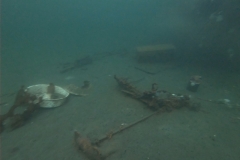 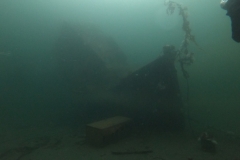 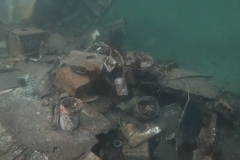 Under water photographs by Ben Zander