Serving residents and communities from Middle Point to Earls Cove/Egmont

Welcome to Pender Harbour and Area Residents Association (PHARA), previously known as Pender Harbour Advisory Council (PHAC), serving the residents and communities on the Sunshine Coast of BC from Middlepoint to Earls Cove/Egmont since 2013.

PHARA is a volunteer organization which exists to support the vitality of the communities of Pender Harbour and Egmont areas as excellent places to live, work and play for residents and visitors. The Association provides a structure that allows residents to identify issues of broad community concern and have them effectively addressed.

The Association draws its main funding from a $10. membership per person per year, or $100 for a lifetime membership fee.  It saw a surge in growth as it moved into its expanded mandate but is looking to include more of the residents in the area. To join please go to our Join Us! section. Members receive regular insider newsletters with updates on the latest activities of the association.

PHARA is involved in the community in many ways, with committees dealing with derelict boats, Dock Management Plan revisions, cleaning local waters of debris, the annual trash bash, beach access signage, community volunteer awards, the installation of No Wake signs in the harbour and much more. We invite community input into other projects we should take on as an association. 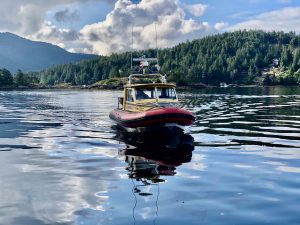 The sea is a big part of our lives on the Sunshine Coast, and one of the main reasons for living or spending time in the area. Many of us get out on the water whenever we can to fish, sail, kayak, paddleboard, or simply explore one of the most beautiful and varied marine environments in the world.

Yet despite its beauty, the waters that surround our coastline can be very unforgiving. Weather conditions change rapidly, turning a gentle sea into crashing waves, driven by fierce winds. Strong currents drag us and our vessels in ways we never expected. Rocks lurk beneath us. Engines break down. Even the most careful and prepared among us sometimes make mistakes, putting our lives and the lives of those who set off with us on the water in jeopardy.

When things go wrong, the volunteers of the Royal Canadian Marine Search & Rescue (RCMSAR) Station 61, based in Pender Harbour, are there to respond. The dedicated team aboard their specialized vessel, the Iona C, covers a vast portion of the Malaspina Strait, as well as Jervis Inlet, Princess Louisa Inlet, and Hotham Sound. Throughout the year, no matter the conditions, they set out to help those who are in distress. They also provide support and act as safety vessels and first-aid assistance to community events year-round.

Donations are always appreciated:  you can help at www.rcmsar61.ca/donate

To learn more about Station 61, checkout their new website www.rcmsar61.ca where they offer resources for boaters, including webcams and weather around Pender Harbour.

Your community association is well aware of the controversy surrounding the recent proposals to change the highway signs and rename Madeira Park.  In that light, PHARA along with the Chamber of Commerce prepared two letters: one strongly opposing the proposed name change and the second requesting a hold be put on dual language sign implementation.  We are confident that all affected parties will be able to come together in the very near future to ensure that our voices are heard. The two letters are now in the hands of the SCRD, the shíshálh Nation, the Area A Advisory Planning Commission and provincial government officials.

In the spirit of reconciliation, we look forward to undertaking a process of consultation with all parties to discuss dual language signs and the more important issue of the proposed name change to Madeira Park.

The proposed name change letter can be found here

The dual language sign letter can be found here 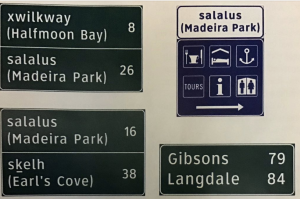 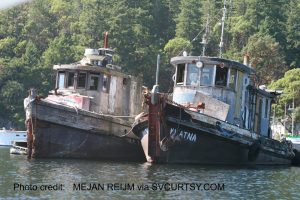 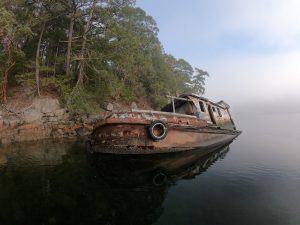 After years of effort by PHARA Board members and with the support of the Federal Government, two of the most notorious Pender Harbour derelicts, the Lulu Island and the Kwatna, have been removed for good—but it wasn’t easy or quick.

After more than two years of effort by PHARA, the removal of the two vessels was approved by Transport Canada’s Abandoned Boats Program and contracted to Gibsons-based Freedom Diving Systems Ltd. They teamed up with Sunshine-Coast-based Hiballer Marine for the use of a tug and barge, excavators from Indian Isle Construction based out of Pender Harbour, disposal bins from Coast Bin Rentals as well as organizing all the necessary spill prevention equipment.

The Kwatna was beached on a rocky shore while the Lulu Island had sunk in about 30 feet of water. The initial plan was to recover the two vessels relatively intact. However, both broke up into hundreds of pieces. The Kwatna was mostly removed using an excavator. The salvors found 16 massive batteries and 460 litres of diesel and oil on the derelict. The sunken Lulu Island broke up into slime-covered pieces that had to be placed by hand by commercial divers into large metal bins on the bottom. The bins were then hauled onto the barge where they were dumped and sorted for metals, wood, hydrocarbons and other materials, most of which had to be disposed of off the coast. The project was slated to take place over three days, but the scope of the work required the barge to be on-site for eight days. In the end, though, Freedom Diving Systems did an excellent job removing all traces of these derelicts.

A huge thanks to Penny Harrison and Eliza Kinley for their ongoing efforts over the years to see this project though to the end.

Unfortunately, there are still a number of other derelict eyesores rotting away in the harbour that need our attention. The association is ready to take action, but we need your support. If you’d like to donate to the cause, please email us at board@phara.ca and we will contact you. For more detailed information on the removal of the derelict vessels, see Derelict Boats under the Projects menu.

Progress on revising the DMP

When the Provincial Government and the shíshálh Nation imposed a new set of onerous regulations concerning dock placement and construction in Pender Harbour without consulting the local community, the community was shocked and angered. In some areas, docks would have to be removed for environmental reasons, though there was no supporting science. Other areas would require new docks to be shared. New dock construction requirements were not based on real science and would actually cause danger. Unproven technologies were given as fact.

This is the major issue of concern for Pender Harbour and will have ramifications throughout BC. For more information, visit Pender Harbour Dock Management Plan 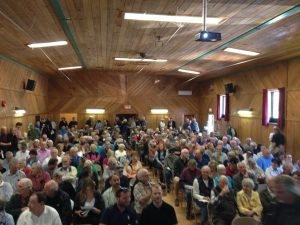 PHARA hosts two Town Hall Meetings each year, once in spring and once in the fall. These well-attended public meetings, held at the Community Hall, serve to up date residents and visitors about the work of PHARA and other community groups. They also include an open mike segment where the general public can express their concerns and issues that they’d like to see addressed. As part of the fall meeting, PHARA in conjunction with the Rotary Club of Pender Harbour, hands out the Community Volunteer Awards.

As a community, Pender Harbour runs on the efforts of volunteers. Most of the wonderful things that happen in the community are the result of countless hours of volunteer labour. This annual award is about recognizing the value of volunteers to our community and honoring specific people or organizations,who, as volunteers, have contributed to significant improvements in the quality of our community. We would like to thank the Rotary Club of Pender Harbour for their generous support for and sponsorship of this award. For more information on the awards, past recipients and/or to nominate an outstanding volunteer, visit the Volunteer Awards link above.

The Pender Harbour and Area Residents Association and the Rotary Club of Pender Harbour are pleased to announce the opening of nominations for the 2020 Pender Harbour Community Volunteer Awards. Individuals or organizations may be nominated for the awards.

The deadline for nomination is September 10, 2020 and all that is required for a nomination is a letter explaining why the nominee is worthy and a few other details.  Nomination form with complete details are available from board@phara.ca or at the following link Volumter Awards Entry Form. The awards will be presented at the PHARA’s Fall Town Hall Meeting.